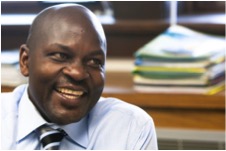 Twesigye Jackson Kaguri is the Founder and Executive Director of Nyaka AIDS Orphans Project.  He was born and raised in Kigezi, Uganda in the small village of Nyakagyezi. At a very young age he demonstrated an unquenchable desire to learn, which led him to study at Makerere University in Kampala. During this time he co-founded the human rights organization, Human Rights Concerns, to help victims of human rights violations in Uganda and to educate the public about their rights.

In the 90s, Kaguri became a visiting scholar at Columbia University where he studied Human Rights Advocacy. Over the years he has been involved extensively in international community efforts as a human rights advocate, fundraiser, and inspirational speaker.

In 2001, Kaguri founded The Nyaka AIDS Orphans Project in response to the devastating effects of AIDS in his hometown. The organization provides free education to children who have lost one or both parents to HIV/AIDS. In addition to two primary schools and a secondary a school, it also operates two libraries, a farm and nutrition program, a medical clinic, two clean water systems, and a support program for the grandmothers who care for up to 12 children at a time.

Since founding the project, Kaguri has also become an author. In “A School for My Village” he shares how he came to build the first school and the struggles he faced during the first few years. His most recent book, “Sitwe Joseph Goes to School”, was published in 2014. It is a children’s book about a young HIV/AIDS orphan who dreams of going to school. In 2010, he resigned as Interim Senior Director of Development in the College of Agriculture and Natural Resources at Michigan State University to focus full-time on The Nyaka AIDS Orphans Project.

Kaguri has been awarded the 2015 Waislitz Global Citizen Award, named a 2012 CNN Hero, a Heifer International Hero, recognized in Time Magazine’s ‘Power of One’ Series, and spoken to the UN about his work. When not visiting the schools in Uganda or working at his office in Okemos, MI, he travels throughout the United States  to speak with students and supporters about the organization.

Kaguri and his wife and children live in Michigan, USA.