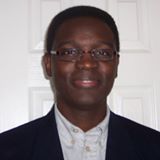 Tony Ekodeu is a Senior Managing Consultant and IT Architect with IBM Canada. He was born at Mulago Hospital, in Kampala, Uganda to the late Peter Ekodeu, of Serere, Soroti and Edith Ekodeu of Kabarole, Fort-Portal. Mr. Peter Ekodeu was a civil servant who, at his early retirement, was Managing Director of the Voice of Uganda and also Under Secretary at the Ministry of Information and Broadcasting. Mrs Edith Ekodeu worked as secretary at the Uganda Commercial Bank.

Tony attended Mwiri Primary School, King’s College Budo and the Makerere University Institute of Statistics and Applied Economics, where he graduated with a Bachelor of Statistics degree in 1990.

After graduating from Makerere University, Tony worked as a Systems Analyst, responsible for the implementation of a computerized Stocks Control System at the Coffee Marketing Board, until 1995 when he left Uganda to pursue further studies in the United Kingdom. In 1996, Tony obtained a Master of Science degree in Analysis, Design and Management of Information Systems from the London School of Economics.

Tony went on to apply for and was admitted to a PhD program at the London School of Economics in the UK. But in 1997, prior to embarking on his doctorate, Tony decided to move to Canada and pursue a career in industry instead of academia.

In 1997, he joined the Canadian office of a US-based systems integration company where he worked as a Senior IT Consultant, designing and developing integration solutions for Fortune 500 companies.

In 2001, Tony joined IBM Canada where he has been since. He has worked on several large and complex IT solutions across North America and overseas. His specialty is in Enterprise Systems Integration and he currently leads the Enterprise Application Integration team at IBM Canada. He is also a member of The Open Group as a Master Certified IT Architect.

Tony’s passion is to ‘contextualize’ or ‘indigenize’ the application of Information and Communication Technologies (ICT) in developing countries. He believes, developing countries should adapt rather than adopt technology. He is also involved with a variety of mentorship programs for young people and has been a guest speaker at professional, cultural and youth conferences in and around Toronto.

Tony, who speaks or understands seven Ugandan languages, is a devoted Christian. He is involved in his local church and other charitable organizations and ministries in the Toronto area. He is an avid tennis player and follows socio-economic and political issues around the world.

Tony and his wife Cheryl, currently live in Burlington, Ontario, Canada with their two beautiful daughters.