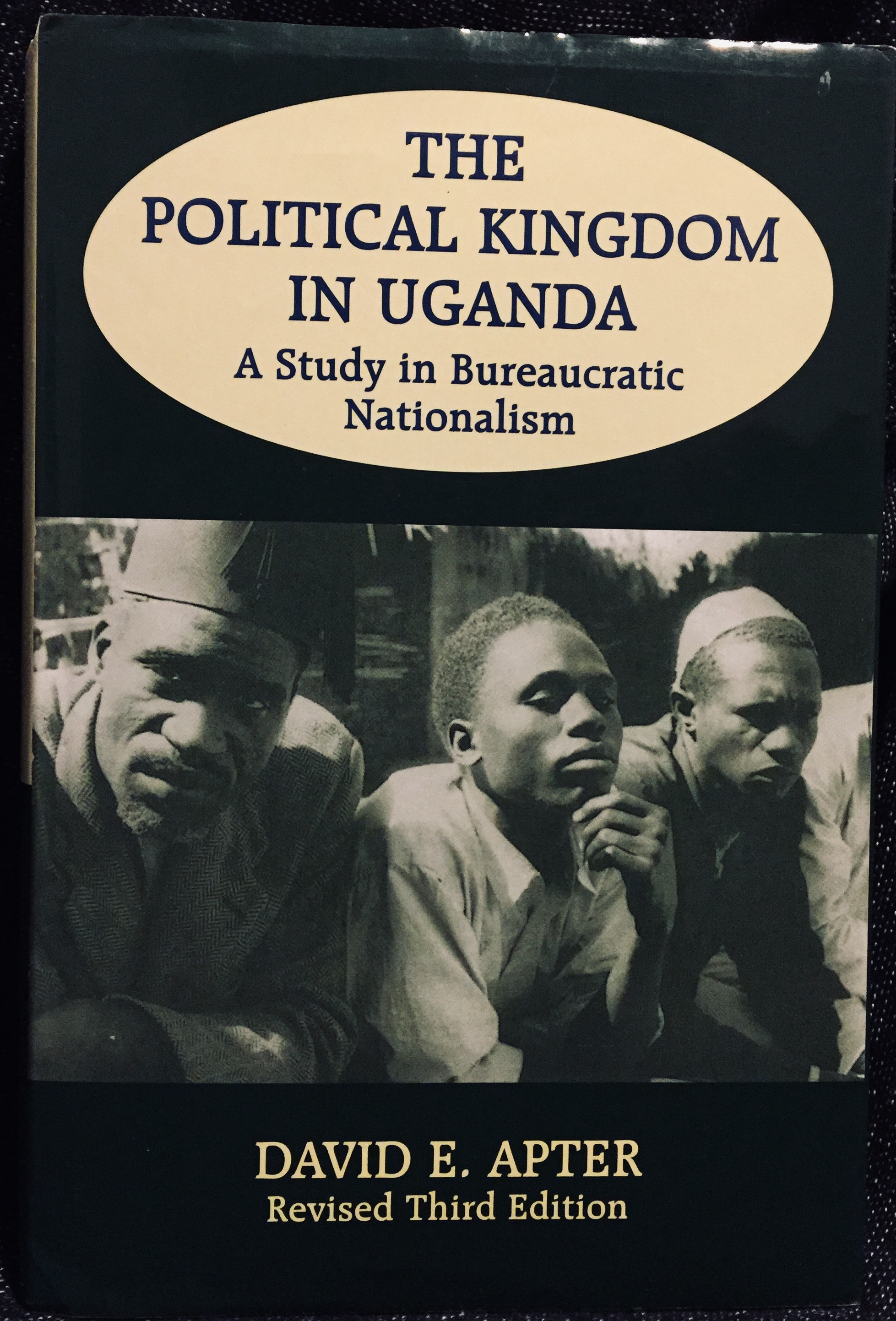 This book is an analytical study of the internal and external politics and systems of Buganda, the central and largest kingdom in Uganda. The development of political parties and the great conflicts in post 1900 Buganda are thoroughly presented and analysed. But more than politics, it is an anthropological and historical account of the evolution of government in Buganda, and a theoretical presentation of authority models in a continent that was emerging from colonialism.

Apter’s three authority models are: (i) mobilization type – where a society is thoroughly reorganized to form a new unit (Ghana); (ii) consociational type – where constituent members remain autonomous but are joined together in federation (Nigeria); (iii) modernizing autocracy – where the society adopts modern, progressive ways, but retains a very strong cultural base (Ethiopia and Morocco.)

Apter sees Buganda as fitting the modernizing autocracy model, but is mindful of a potential clash between modernization and Obwa Kabaka (the kingship), the central institution of Buganda. Writing in 1960/61, Apter sees a problem with “fitting a modernizing autocracy into a national system of pyramidal authority.” He adds a sobering thought: “Until Buganda in fact becomes a local democracy accepting a representative principle of government, the future of democratic government will be disappointing in Uganda.” (page 475)

The first edition of this book was published in 1961, just a year before independence. Things fell apart within three years of independence. The clash between the central government of Uganda and the Kingdom of Buganda triggered a crisis that remains unresolved at the time of this writing.

Apter wrote a long introduction to the Revised Third Edition (1997) that attempted to address the catastrophic collapse of Uganda and the efforts to repair it. Whereas that introduction is not a result of research work in Uganda, it is a nice bridge from pre-independence Uganda to the post-Obote II period. (I would have made it an epilogue.)

The Introduction has a few errors that suggest that the author was making assumptions about what happened. How else do we explain his report that President Yusufu Lule lasted for about six months, after which he was overthrown in an overnight coup by Godfrey Benaisa (sic), a Muganda favoring the Uganda People’s Congress, Obote’s Party”? (Lule lasted 68 days as president. Binaisa was as surprised as many of us were when, literally out of the blue, he was appointed president by the National Consultative Council.)

Notwithstanding such errors, Apter’s book remains a classic study that affords us better understanding of Buganda and its difficult relationship with Uganda. It speaks to our generation as we struggle to find a peaceful settlement that offers a win-win solution to Buganda and the rest of Uganda. Apter writes: “Once (democracy) is accomplished in Buganda, and the latter accepts a consociational relationship with the rest of Uganda, then the prospects of democracy in a system of representative self-government will indeed be bright.”  In other words, a federalism of equals.

This is essential reading.