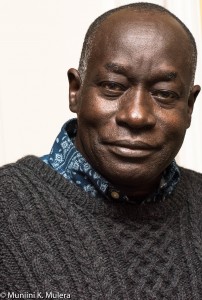 Bbuye Lya Mukanga was born and grew up in Entebbe, Uganda. Upon graduating from Makerere University, he was a Ford Foundation Scholarship Fellow at the Makerere Institute of Social Research while studying for the MSc (Agriculture) degree in Agricultural Economics and serving as a Special Teaching Assistant in Economics. He left Uganda at the peak of the Idi Amin era of political instability.

He has Masters’ and Doctorate degrees in Applied Economics and a Master’s in Information Science. He worked as a Research Associate and then Assistant Professor in the US Department of Agriculture’s Agricultural Research Service, and then as a Farming Systems Research Scientist in West Africa.

Bbuye has spent the last 25-plus years in various countries in Asia in policy advisory roles. Among other things, his work in Asia has covered areas such as: national, provincial/state and local economic planning and management systems; establishment of modern systems for the provision of agriculture services; the use of economic policies and tools (such as rural and regional development, finance and budget sharing, and business and entrepreneurship promotion) in building good governance systems practices and promoting reconciliation and peace building; poverty reduction and the eradication of hunger and malnutrition. He has been involved in reconciliation and peace-building efforts in many potential conflict, actual conflict and post conflict situations.

He narrates two personal stories that helped him not to take himself too seriously and to encourage others not to take themselves too seriously either. The first story was when he was a Second Year student at Makerere. He and two friends, one from Ankole and one from Bunyoro went to a public institution that had run advertisements for vacation jobs for students. After a meeting that lasted all of 3 minutes, the Personnel Officer informed the three friends that all vacancies had been filled.

As the three friends were leaving, they overheard the Personnel Officer telling another person in the room, “These [crude ethnic purgatory in Luganda] think I can give them jobs. They must be joking. They do not know me.”

The second story goes back to the time after Bbuye graduated from Makerere University. The recipient of a First Class Honours and Double Majors degree, Bbuye approached the Head of Department of one of his major subjects to inquire about prospects for joining the staff development programme. The Head of Department looked Bbuye in the eyes and told him in a harsh voice, “You Baganda think that this university belongs to you. There is no place in this Department for you.”

Bbuye decided to try the second Department in which he had also majored. That Head of Department simply told him, almost tearfully, that there were no openings. However, a short while after that, a colleague who had received a Lower Second degree was hired by the Department as a Teaching Assistant.

Some time after that there was an exodus of teachers from Makerere. When the Ford Foundation was closing its programme in Uganda, the Programme Head helped Bbuye to move to a programme in the USA.

Bbuye also tells a story that convinced him that there must greater things in store for Uganda than the broth that the citizens have been served over the past 50-plus years. Some years ago, colleagues in the national planning agency in an Asian Tigers country told Bbuye that 40 years ago their country had been poorer than Uganda. People from the Asian country had even gone to Uganda to learn about ‘national planning’ and other facets of ‘development’.

They had started planning the development of their country based on knowledge and know-how they had obtained from Uganda. So, Bbuye’s Asian friends wanted him to answer the question: “How come our country is now more developed than Uganda?” They were genuinely perplexed. So is Bbuye.