It started snowing early this morning. First snow of the season. Cold day outside. 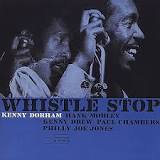 Born McKinley Howard Dorham in Fairfield, Texas on August 30, 1924, Kenny D. was a self-taught musician who played the trumpet and piano. His music making was masterful, at par with the better-known trumpeters like Lee Morgan, Freddie Hubbard and Donald Byrd.

Tonight, I chose WHISTLE STOP (BN ST-84063), one of Dorham’s great Blue Note recording as a leader, originally released in 1961.  First, the music:

Regardless of format or vinyl reissue I have listened to, Whistle Stop is always beautiful top tier bluesy hard-bop. All seven cuts are original compositions by the Kenny Dorham. At the time of the recording, Dorham and Mobley had already played together in the Jazz Messengers and, later, in Max Roach’s band (after the death of Clifford Brown in 1956.) The two men’s musical partnership and conversation comes through their horns with joyful confidence.

Kenny Drew unobtrusively comps along and offers lovely piano solos. Paul Chambers and Philly Joe Jones, who were part of the first great Miles Davis Quintet, propel the proceedings with power and unwavering rhythm. Of course Drew, Chambers and Jones were the rhythm section on John Coltrane’s Blue Train.

All the pieces on this LP are very enjoyable indeed. However, to my ears, Sunrise in Mexico tops them, perhaps because of Chambers’ steady, walking bass and Drew’s delicious melodies.

Now, the sound: First I played the 45-RPM 2008 reissue by Analogue Productions. A numbered and limited edition of 2500 copies, the Analogue Productions reissue was mastered by the celebrated Kevin Gray & Steve Hoffman at AcousTech, using original master tapes. Pressed on two 180g Virgin Vinyl LPs by Record Technology, Incorporated (RTI) in Camarillo, California, these 45 RPM records sound very good indeed, certainly much better than the CD (RVG series) version and downloads that I have heard. I have not listened to the Classic Records (2009) or the Japanese re-issues of Whistle Stop. I have certainly not listened to the original version from 1961.  (For the serious collector, the Analogue Productions LPs are in a single jacket, with seams prone to splitting and no session photos.)

I then listened to  a mint review copy of the upcoming 33 1/3 RPM reissue that Ron Rambach, owner of Music Matters Jazz, gave me when I visited him in Oxnard, California on Friday October 21, 2016. The sound that emanates from this 180g virgin vinyl pressing is outstanding! Truly a musical revelation, with details that  one had not heard  before! This sounds clearer, with all instruments very distinct and yet together.

On “Buffalo”, one hears Chambers’ bass with a clarity that surpasses that on other reissues. The great blues playing sounds very fresh. Mobley’s majestic, swinging, flawless and guttural tenor is in the big Texan mode. Dorham’s trumpet has a fatness that recalls Clifford Brown.

This is essential Jazz music, presented by an outstanding unit led by a trumpeter who was not given the accolades he rightly deserved. His premature death from kidney failure on December 5, 1972 robbed us of one of the most talented players and innovators. That he died 10 months after Lee Morgan, another great Jazz trumpeter, was murdered was a double tragedy. Fortunately, his music lives on, thanks to the work of those who recorded, preserved and reissued the work with meticulous attention to detail.