MUGISHA MUNTU: A democrat in words and deed 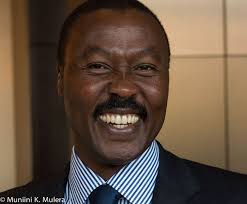 Gregory Mugisha Muntu, the President of the Forum for Democratic Change (FDC), likes to remind his fellow politicians that they cannot give what they don’t have. This is usually said in the context of demands for democracy and transparent leadership that are his party’s raison d’etre. Muntu says this with the confidence of one who knows that he cannot be challenged on the matter. He has repeatedly demonstrated that he lives by what he says.

As one of the longest serving commanders of the Ugandan armed forces, Muntu earned the reputation of an incorruptible leader who demanded the same of his subordinates. Where others engaged in unconventional accumulation of wealth, he chose the simple life of a salaried army officer that was loyal to the ideals of the armed rebellion for which he had risked his life.  Where others grabbed whatever job opportunity they could, he turned down President Yoweri Museveni’s invitation to become his minister of defence following his removal from army command. Where others were afraid to speak truth to power, Muntu verbally challenged Museveni’s manipulation of the Constitution to entrench himself in power. They parted ways and Muntu chose the hard road of opposition politics, becoming a member of the Parliamentary Advocacy Forum (PAFO) and, later, a founder member of the FDC in 2005.

Right from the start, his message to the young party was that genuine internal democracy was a prerequisite to fighting for democratic change in the country. In a society where challenging a popular leader raises discomfort, Muntu did not hesitate to compete with Dr. Kizza Besigye for the presidency of the party. So far, the two men have engaged in vigorous competition three times. On each occasion, Muntu has graciously accepted defeat and supported Besigye.

When Besigye challenged Muntu for the party’s flag bearer position for the 2016 presidential “election,” Muntu, who was party president, welcomed the competition with a trademark eagerness that baffled some. Besigye defeated Muntu. The latter then threw his full support behind Besigye and was frequently by his side throughout the gruelling campaign.

With Besigye under house arrest following the “election” on February 18, 2016, Muntu became an indefatigable comrade of his besieged political competitor. He provided the leadership that the Ugandan opposition needed at that very difficult time. He did not hesitate to lead the party in reaching deep into the grassroots, even when the state machinery was working overtime to frustrate the opposition parties.

None of this is surprising to those who know his history. Born on October 7, 1958 at Kitunga village in present day Ntungamo District, Uganda, to the late Enock Ruzima Muntuyera and Aida Matama Muntuyera, Muntu had his early education at Mbarara Junior School and Kitunga Primary School. He completed his O-Level at Kitunga High School, which was later renamed Muntuyera High School in memory of his father.

Muntu attended Makerere College School for his A-level before entering Makerere University where he graduated with an honors degree in Political Science. While at Makerere University, his desire for service inspired him to actively participate in guild politics and was  served as Vice President of the Makerere Students’ Guild in the government of Werikhe Watuwa.

Seven days after completing his degree at Makerere, Muntu left all the luxuries at his disposal to join the National Resistance Army (NRA) to the surprise of his family and the leaders of the Uganda People’s Congress (UPC), the party that his father fervently work for. He could have chosen the easy route to a guaranteed job as an aide to President Milton Obote.

Early into the rebellion, Muntu was shot and severely wounded in the chest and leg. He was brought to Kampala for treatment and many thought he would not return to the ranks of the NRA in the jungles of Luweero.

To the surprise of many, he returned to the bush. Muntu underwent further military training in Russia and thereafter became a Division Commander in northern Uganda. Due to his exemplary leadership qualities, he was promoted to the rank of Major General and appointed Army Commander in 1989, a post he held until 1998 making him the second longest serving Army Commander in the history of Uganda.

As army chief, he oversaw the professionalization and institutionalization of the national army. He is credited with instilling discipline in the army and gained repute as an incorruptible, even-handed and firm military leader. At the end of his service as Army Commander, Muntu chose not to take up a ministerial position he had been offered by President Museveni.

Along wit his military duties, Muntu served as a Member of the National Resistance Council, the Constituent Assembly and the Sixth Parliament where he represented the army. He was elected a Member of the East African Legislative Assembly in Arusha, where he served from 2002 until 2012.

Muntu served as the FDC Secretary for Mobilization from 2005 to 2012. Notwithstanding the party’s limited finances, Muntu worked with the leaders and members of FDC to establish a functional grass roots party structure.  A disciplined and humble man with impeccable integrity and demonstrated experience in public affairs, Muntu was elected President of the FDC on November 22, 2012.

The election was followed by serious tensions and rows that threatened to tear up the party. However, he was successful in holding the party together because he successfully worked with leaders on both sides to reach mutually acceptable accommodation. The wisdom of his decision to focus his energies as party president on building the party structures became apparent during the 2016 national presidential campaign.

Muntu is a genuine democrat, an advocate for transformative politics and a team player who enjoys respect across the entire political spectrum. Many Ugandans believe that he is highly qualified to be President of the Republic of Uganda. Others say that Muntu “is the best president Uganda never had.”

Outside politics, Muntu has engaged in a quarrying/mining business in Uganda since 1998. This has given him firsthand knowledge about the opportunities and challenges of doing business in Uganda. He is a family man who is happily married to Julia Kakonge Muntu. They have two children.

Muntu, who has offered himself for re-election as president of FDC, has been criticised by some for being too much of a gentleman to lead Uganda. “He is fit to lead a Nordic country,” someone has commented in a Facebook conversation.  If being an honest gentleman and a democrat in deeds and not just in words disqualifies one from leading Uganda, then our country is in a darker place than we realize. But in fact Uganda is worth saving and worth redirecting to a path that has seen the Nordic countries prosper as genuine democracies that respect their diverse populations. Muntu is the leader that Uganda deserves.

One Response to “MUGISHA MUNTU: A democrat in words and deed”