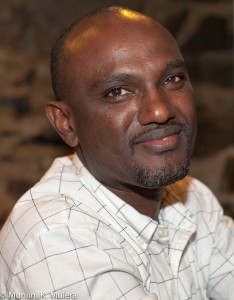 A husband, father, journalist, diplomat, peacemaker, down-to-earth intellectual and a friend– this is how I would describe Ambassador Adonia Ayebare, Uganda’s Permanent Representative to the United Nations in New York. Until recently, Adonia was a Senior Adviser on Peace and Security at the African Union Permanent Observer Mission at The United Nations, New York.

He previously worked as Deputy Permanent Representative and Chargé d’Affaires at the Uganda Mission to the United Nations in New York. He also served as the Director of the Africa Program at the International Peace Institute where his responsibilities included facilitating a 10-year program of action for the United Nations to strengthen the capacity of the African Union in the management and resolution of conflict.

Earlier in his career, Adonia was a journalist and covered major events in the East African region for several East African magazines and for IRIN, the regional information network for the UN Office for the Coordination of Humanitarian Affairs.

After joining the Ugandan Ministry of Foreign Affairs in 1999, Ambassador Ayebare served as Head of Mission with the rank of ambassador to Rwanda and Burundi from 2002-2005 and subsequently became principal adviser and special envoy of Uganda to the Burundi peace process. As Uganda held the chairmanship of the Burundi peace initiative, Adonia worked closely with South African and Tanzanian mediators, as well as with Burundian President Pierre Nkurunziza and his predecessors.